Kare-san-sui surrounding is a project formed by various artists — such as musicians, engineers, programmers, designers, etc. — aiming to offer a relationship between ‘people’ and ‘sound’ from a new perspective. We liken the handling of sound to the garden-making art of Karesansui, and apply cutting edge multimedia technology and originally developed audio processing technology to create an artificial garden of sound within public spaces. 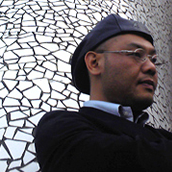 After studying musical compositions from Shuko Mizuno and working as recording assistant for ex-Yellow Magic Orchestra member Haruomi Hosono, :::: released his first album under the name WhySheep? in 1996. This album was sensationally introduced by numerous media around the world. After this release, :::: traveled to various countries mainly in Asia and Europe, and following a seven-year period of silence, his second album The Myth And i was released simultaneously in Japan, Europe and the U.S.A. ::::’s strenuous activity ranges from performing at various venues in and out of Japan, doing Re-mix works for artists such as Ken Ishii, and producing movie sound tracks for Kadokawa pictures and others. He established Karesansui sounding as one side of his activities, and serves as the creative director of this project.

Please feel free to contact us for any further information.
mail: info@kare-san-sui.com